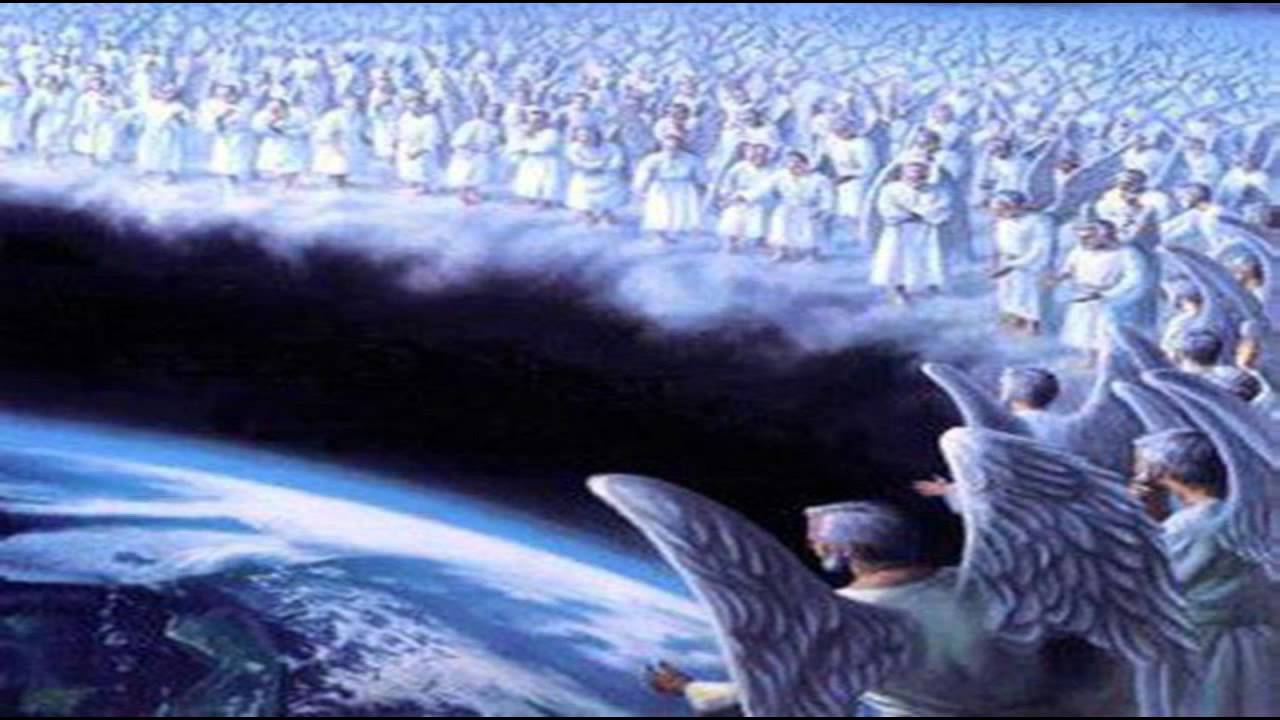 The creation of the spiritual world of angels is one of the most marvelous works of God, because in it, God created free beings endowed with reason to serve His omnipotent will, and to assist in accomplishing His perfect work which was created according to His divine will. If angels are free beings endowed with reason, helping to fulfill the perfect will of God, surely it is evident that they have been created not according to the perfect plan of God, but according to a lesser plan – even one of the many plans of God.

And if they are less than the perfect plan of God, and are its ministers, surely it is evident that they also are lower than God’s perfect work, and are His servants. Hence how does the misconception arise on the part of some, that angels have a worth and destiny higher than that of man, or that they are more perfect beings, superior to man who is the perfect work of God?

When St. Paul contrasted the limited state of the angels with the perfect man, Jesus Christ, he noted: “But to which of the angels said he at any time, Sit on my right hand, until I make thine enemies thy footstool? Are they not all ministering spirits, sent forth to minister for them who shall be heirs of salvation?” (Hebrews 1:13,14).

The nature of the angels, as St. Paul instructed, is spiritual. The angels are free, capable of thought and of reasoning, but their destiny is to serve in God’s presence and to help effect His almighty will, for they are sent forth for service to those who thirst for the life-giving waters and eternal salvation of the Son of God, Jesus Christ.

For the implementation of His almighty will, God creates everything that may contribute to its fulfillment, for His will shall triumph in the end. It is the final work of God. All that come into being before God’s perfect work are means suitable for the achievement of the wonderful, perfect work of God. Among the means suitable for the accomplishment of the will of God are found the angels or the spiritual world which God created before the world of nature that our senses perceive, and before the moral world which is the perfect world, in equality with God, in which dwells all the fullness of the Godhead eternally.

When Holy Scripture declares that in the beginning God created heaven and earth, it teaches that in the beginning God proceeded first to the creation of the world of angels, and later, after its creation, went on to the creation of the perceptible world. This it called earth because of its still shapeless state without any form.

However, both heaven and earth, and in general whatever came into being, resulted from the primordial matter which God produced from nothing when He caused being to exist through His special activity in creation. Moreover, the book of the righteous Job bears witness to the fact that angels were created before the perceptible world. just as the holy book of Genesis records. “When the stars were made, all my angels praised me with a loud voice” (Job 38:7; LXX).

Because it is clear that the angels were God’s assistants in the creation of the world of nature and panegyrists of His wisdom and might revealed through creation, then surely they were created before the first act in the creation of nature – light, a supreme and marvelous act of creation. Light is the work of the first day. But if the world of angels praised the creator for this wondrous work, is it not clear that their world was created before all the works of natural creation?

The world of angels – created before the world of nature, before the creation of the earth – was the agent of the divine commands that issued from the mouth of God. God spoke and the angels fulfilled His word. Thus the prophet David exclaimed: “Bless the Lord, all ye his hosts; ye ministers of his that do his will” (Psalms 102:21; LXX). And again, “Bless the Lord, all ye his angels, mighty in strength, who perform his bidding, ready to hearken to the voice of his words” (Psalms 102:20; LXX).

Because angels possess intelligence, they are meditative beings. Possessing also free will, they are free beings freely obeying the Word of God, which for them is the focus and guiding principle of their own activity. They think, they make decisions, and they experience joy and sorrow. They are without bodies and consequently are imperishable and deathless. Generally speaking, they are beings well qualified for service to the almighty will of God.

There are many angels, but the exact number is unknown, save to God alone. This is what the prophet Daniel saw in his vision: “I beheld until the thrones were set, and the Ancient of days sat . . . (a) thousand thousands ministered to him, and ten thousands of myriads attended upon him . . .” (Daniel 7:9, 10; LXX).

Irrefutable testimony concerning the host of angels was borne by our Lord Jesus Christ when He proclaimed: “Thinkest thou that I cannot now pray to my Father, and he shall presently give me more than twelve legions of angels?” (Matthew 26:53). The great apostle, St. Paul, bore witness to the truth that the angels are numerous when he wrote: “. . . But ye are come unto mount Sion, and unto the city of the living God, the heavenly Jerusalem, and to an innumerable company of angels . . .” (Hebrews 12:22).

The angels, as intelligent spirits without bodies, are not subject to birth, death and decay. When Jesus refuted the Sadducees who denied the existence of angels, He taught that in the life to come, the spirits of the righteous neither marry nor are given in marriage, but are as the angels of God in Heaven (Matthew 22:30).

In this point the angels are superior to mankind, for because they are bodiless, they are not subject to birth or death, or to the sufferings which humans endure while indwelling this body. St. Paul expounded concerning this subject: “Thou madest him” (Christ) “a little lower than the angels; thou crownedst him with glory and honour … But we see Jesus, who was made a little lower than the angels for the suffering of death, crowned with glory and honour; that he by the grace of God should taste death for every man” (Hebrews 2:7,9).

But now they make decisions freely and are able to make good or evil decisions. They are able to think the very opposite of truth and commit acts the very reverse of good. They are changeable and variable. They change in their intentions and so in their freedom they may fall and slip into disobedience and rebellion against the good.

With the passage of time, angels understand the gracious will of God, for they do not understand everything from the beginning, as Christ noted: “But of that day and that hour knoweth no man, no, not the angels which are in Heaven, neither the Son, but the Father” (Mark 13:32). Yet the angels possess the will and desire to gaze intently into the knowledge of the whole mystery of God. St. Peter wrote concerning the angels, “Unto whom it was revealed, that not unto themselves, but unto us they did minister the things, which are now reported unto you by them that have preached the gospel unto you with the Holy Ghost sent down from Heaven; which things the angels desire to look into” (I Peter 1: 12).

Moreover, angels learn the mystery of the will of God through the Church, in which the will of God is made manifest. Again St. Paul penetrated this divine phenomenon: “Unto me, who am less than the least of all saints, is this grace given, that I should preach among the Gentiles the unsearchable riches of Christ; and to make all men see what is the fellowship of the mystery, which from the beginning of the world hath been hid in God, who created all things by Jesus Christ; to the intent that now unto the principalities and powers in heavenly places might be known by the church the manifold wisdom of God, according to the eternal purpose which he purposed in Christ Jesus our Lord . . . ” (Ephesians 3:8-11 ).

Because angels are intelligent beings, they always see the face of God, as Christ said, and they rejoice over the repentance of a single sinner: “. . . In Heaven their angels do always behold the face of my Father which is in Heaven” (Matthew 18:10). “Likewise, I say unto you, there is joy in the presence of the angels of God over one sinner that repenteth” (Luke 15:10).

They are taught to remain faithful to the gracious will of God and to His Word by showing ready acquiescence and obedience. The angels have not been created to be equal with God, but to be servants and ministers of His almighty will, and as this will is effected, the world of angels experiences joy in proportion to the accomplishment of God’s great work. It will rejoice in the kingdom of God, for it has served well and faithfully toward the fulfillment of the divine will. It will receive the reward due to the servant who has fulfilled his duty to his lord faithfully.

St. Paul noted that God never said to any of the angels that the angel was His Son, or that that day He had begotten him. ” For unto which of the angels said he at any time, Thou art my son, this day have I begotten thee?” (Hebrews 1:5). From these words the holy apostle drew the conclusion that the angels were not created according to the final, perfect will of God, and that accordingly they are not higher than the perfect man (Christ), who is the Son of God. Concerning Him, God declared: “Thou art my Son, today have I begotten thee” (Psalms 2:7; LXX).

The angels are not the sons of God; consequently, they have not received the legal title to sonship, nor have they the destiny of being equal with God, or of theosis, possessed only by the perfect man unto whom the angels minister. The Holy Spirit spoke through the mouth of the psalmist David thusly: “For he shall give his angels charge concerning thee, to keep thee in all thy ways. They shall bear thee up on their hands, lest at any time thou dash thy foot against a stone” (Psalms 90:11,12; LXX).

The nature of the angels, because it incorporates thought and willpower, is to minister unto and to serve the divine will of the heavenly Father. The angels come to learn and know this will as God Himself teaches them and declares it unto them. For this reason they are called angels, for they are sent forth to serve those who are to obtain salvation, as St. Paul taught, serving the fulfillment of the absolute and perfect will of God and the creation of His perfect work.