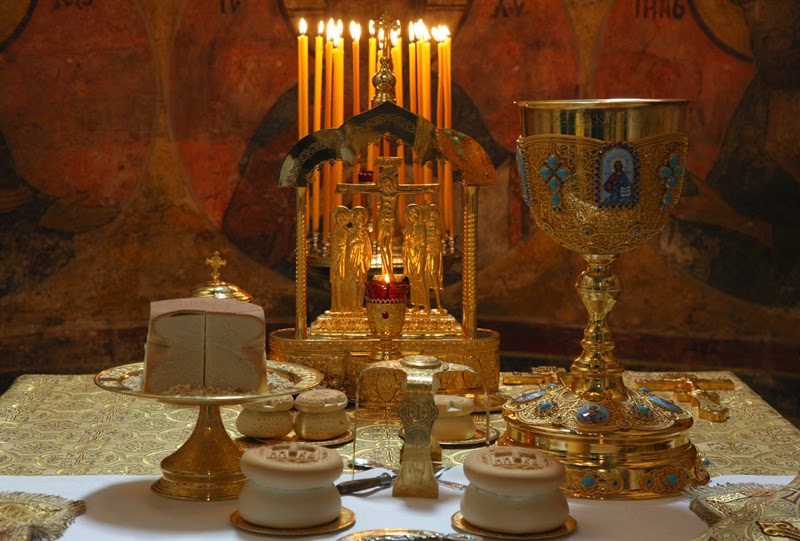 Having shown in the preceding article that the only form of worship that pleases God is that carried out by means of the sacrament of the Eucharist celebrated in the manner which the Son of God, acting as our great high-priest, prescribed to the Church, and was the first to celebrate the sacrament in the night in which He was betrayed; at the same time we also showed that this sacrament is the source of all virtue, the fountain of all good, and the cause of happiness in individuals and in society as a whole. This sacrament being such, I call it Hidden Treasure, far more precious than many treasures and many mines. I call it a treasure because of its value and beneficialness, which surpasses all imagination; I call it hidden because this treasure and the benefit to be derived from it are unknown to most people. In my estimation, to bring such a treasure to light, that the poor may become rich, that the afflicted may be gladdened, and the unhappy made happy, is a task to be zealously taken up and followed until achieved. In undertaking this task with the help of God, we intend to examine the following three points of interest:

Let us begin, then, with the first point.

Every treasure has need of guarding and of guards, for every unguarded treasure can be plundered by thieves and robbers. The sacrament of the Eucharist is a treasure, and of all treasures the most valuable. The guardians of this treasure are the faithful disciples of Christ; the marauder of it is the envious Devil, who is leader of all the thieves and robbers that plunder the estate of the soul as well as of the body. It is the part of a good guardian to know the designs of the enemy, and how to repulse him when he makes an incursion to pillage the treasure. It is the nature of a thief, on the other hand, to deceive or to overpower the guardian with the view of plundering the treasure. It is inevitable that fighting should occur between the guardian and the would-be thief on account of the treasure; and there is continual fighting about the sacrament of the Eucharist, about this most precious treasure, and in order to keep the treasure, we have to fight and repulse the designing enemy. The saving of the treasure must precede the using of it; for if the enemy should succeed in pillaging the treasure, there would be no longer any use of it, or use of it would be impossible. Let us therefore put on the panoply of God, and join battle with Him against the Devil, when he assails us with his battalions to pillage the treasure. But before the battle we must reconnoitre the enemy and his troops.

The Devil, as we said above, is the leader not only of thieves and robbers of corporeal goods but also of those who plunder the soul. The property of the soul is its being and the truth, which latter the Evil One endeavors by hook and crook to steal away from our souls. Moreover, just as in the case of war the commander-in-chief does not do any fighting himself but directs the fighters, so the Devil fights us through the agency of men whom he has influence over and directs. Just as the one army of a general is divided into various battalions, and each battalion carries on a single kind of fighting, so the soldiers of the Devil are divided and distinguished into many different battalions, and he used each battalion according to its fitness for a certain kind of fighting. In fact, we can divide the whole army of the Devil into two great battalions, that of the unbelievers and that of the heretics. By means of the unbelievers armed with the weapons of sophistry or pseudo-philosophy he combats the divinity of our Lord Jesus Christ. By means of the heretics armed with the weapons of garbled passages and distortions of the Scriptures he combats the worship of God and the dogmas of faith upon which the Church is based. The Devil cannot attack the treasure of the sacrament of the Eucharist by means of the unbelievers, who deny the divinity of Christ, for inasmuch as they deny the principle they cannot dispute with the faithful about the consequences of the principle, they cannot take issue as to the testimony of the sacred text. He attacks the sacrament, however, by means of the heretics, who, while avowing the divinity of Christ and admitting the Holy Writ as the word of God, attempt to pillage the truth by misinterpreting the Scriptures. Since the fighting here concerns the treasure of which we have been appointed guardians, we are not obliged to fight with the unbelievers but only with heretics. The latter, also, are distinguished into two different battalions, that of the Roman Catholics and that of the Protestants. Many Protestants fight the reality and truth of the treasure by asserting that the bread of the Eucharist is not the actual body of Christ, nor the wine the actual blood; the Catholics, on the other hand, replace the bread with wafers (unleavened) and assert that the wafers are the body of Christ, whereas they are not. If you conceive the treasure we have been appointed guardians of to be gold, you can then understand how the fight against the Catholics differs from that against the Protestants. The Catholics honor brass instead of gold, and endeavor to persuade us to regard the brass as gold and to guard brass instead of gold. The Protestants, on the other hand, deny altogether the reality and subsistence of the gold, asserting that there is no gold. Now conceive as a treasury the Lord’s table of the sacred altar upon which Christ laid His body and blood, the priceless treasure, and said to us: “This is my body, this is my blood; accordingly, keep the treasure until I come.” But while we are keeping the treasure, the thief and robber, the Devil, sets forth against us at the head of two contrary battalions, that of the Catholics and that of the Protestants. Through the Protestants he says to us, “Those things which you keep and revere are neither the body nor the blood of Christ.” Through the Catholics, on the other hand, he offers us as the body and blood of Christ what is no such thing. We, on our part, are in duty bout to repel both falsehoods of the Devil, and save the reality and truth of the treasure, and not accept the falsehood as truth. It is our duty, indeed, to refute the delusion of the Catholics as well as that of the Protestants, and we shall fulfill this duty of spiritual warfare in the next article, beginning with those who attack the reality and truth of the treasure.