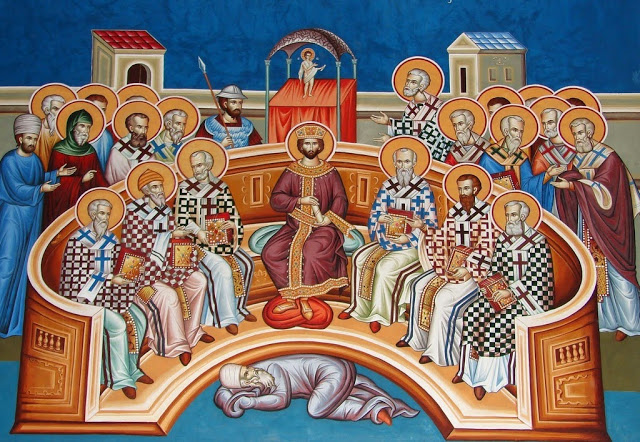 THE DOGMAS TO BE BELIEVED

The dogmas to be believed are contained in the twelve articles of that which is called the Symbol of the Faith. They are these:

This Symbol, to the eighth article there of, was composed by the first Ecumenical Council which met in Nicaea, against the heresy of Arius. The council was made up of three hundred and eighteen of the holy fathers and met in the year 325 A. D., under the reign of Constantine the Great, the first emperor of the Christians. From the eighth article to the twelfth the symbol was arranged by the second Ecumenical Council, which met in Constantinople, against the her­esy of Macedonius, who denied the personality of the Holy Spirit. This council assembled in the year 381, under Theodosius the Great. That in Ephesus, the third Ecumenical Council, assembled in the year 431, under the reign of Theodosius II, against the heresy of Nestorius, defined in its seventh canon, that the Symbol of faith as expressed in Nicaea should prevail without change, and that no one might have any right to add to or take from it. Likewise decided the succeeding Ecumenical Councils; and, until this day in the churches of the Orthodox Christians, the Symbol of the faith is confessed as the first two Ecumenical Councils arranged it and the others con­firmed it.

But by the arbitrary act of Papal Rome, contrary to the deci­sions and anathemas of the Ecumenical Councils, the words “and the Son” were added to the eighth article, and this blasphemous ad­dition became cause for schism of the two Churches, the Eastern Church under no consideration tolerating so antidogmatic a heresy in the Symbol of the faith.

The dogmas to be believed are contained also in the dogmatic definitions of the Ecumenical Councils which came after the arrang­ing of the Symbol of the faith by the two first Ecumenical Councils. The third, in Ephesus, declared that Christ is one in hypostasis per­fect God and perfect man the same; not one then another, as the heretical Nestorius thought and taught; Christ was the Son of the God without a mother on the higher plane and the Son of His MOTHER without a father on the lower. The Council declared that His ever-virgin Mother is properly and truly called the Mother of God, as having properly and truly given birth in the flesh to God the Logos. The fourth Ecumenical Council, that in Chalcedon, convened under Marcian and Pulcheria in the year 451 against the heresy of the Monophysites, Eustyches and Dioscorus, defined that the one Christ was in possession of two natures, the divine and the human, unconfused, unchangeable, inseparable in the one person of Christ.

The sixth Ecumenical Council, convened in Constantinople, under Constantine the Bearded, against the heresy of the Monothelites, Sergius, Pyrrhus, Paul, Peter, Patriarchs of Constantinople, and Honorus, Pope of Rome, and the rest, in the year 680, defined that the one Christ is in possession of two wills and two natural activities corresponding with the two natures of Christ. These dog­matic definitions with the twelve articles of the Symbol of the faith constitute the entirety of the dogmas to be believed, which save those who believe in them from the danger of eternal punishment, not alone, but with the virtue of the mysteries to be celebrated and the commandments to be kept.

We shall consider what every one of the faithful ought to think and believe concerning each of these three objects of knowledge and the relations between them, in consonance with dogmas to be be­lieved, as already set forth.

“I believe in one God” it is declared in the first article of the Symbol of the faith. Faith in one God, self existing, always existing, knowing all things, knowing Himself, all-wise, all-powerful, holy just, good, beautiful, perfect, self-sufficient, needing nothing, absolute Lord; faith in one God such as this in the first dogma to be believed and the basis of all of the dogmas of the faith. This dog­ma the voice of God speaks into our ears, saying, “Hear, O Israel, the Lord our God, the Lord, is one,” (Deut. 6:4) “There is no God besides me. I am the Lord God, and there is none besides.” (Isa. 45:6) “I am the first and I am the last, and besides me there is no God,” (Isa. 44:6)

The substance of the Son necessarily is identical with that of the Father of whom He is begotten; because the name son signifies nothing other than a consubstantial off spring of the one begetting. In this we distinguish the difference from a thing that is made; for a thing that is made has been prepared out of other material and is not derived from its own being. For this reason the second article of the Symbol of the faith defines the Son as being of one substance with the Father and differentiates “begetting” from “making.” The latter is excluded from the personality of the Son by the words “begotten not made.” Light is predicated of the substance of the Father. Light is named likewise of the substance of the Son; but light that is true, superior to that of the natural world, revealing an Intelligence knowing of itself and knowing all things, all-wise and almighty. The Father is named true God, and the Son is named true God, being the self-same image of the Father. He who sees the Son sees the Father.

The eighth article, therefore, of the Symbol of the faith names the Holy Spirit the Lord and Giver of life. With the Father and the Son He is glorified, and equal honor and worship should be rendered to Him.

The underlying substance and nature are the same. The co-eter­nal existence of the three persons, of whom the first, the Father, is the uncaused origin of the two others, i.e., of the Son and of the Holy Spirit, reveals an identity of attributes of the one, unchange­able, perfect, and self-sufficient God, distinguished by the distin­guishing attribute of unbegotten, begotten, and proceeding. The Father is unbegotten, uncaused, and without an origin; the Son is begotten, having the origin and cause of His existence in the Father; and the Holy Ghost, having the origin and cause of His existence also in the Father, but not also in the Son, as affirmed by the antidogmatic heresy of the Papists.

“There are three that bear witness in the Heaven, the Father, the Logos, and the Holy Spirit, and these three agree in one,” (1 John 5:7).

“Go ye therefore and make disciples of all the nations, baptizing them in the name of the Father and the Son and the Holy Ghost, teaching them to observe all things whatsoever I have commanded you,” (Matt. 28:19).

Every man, therefore, who desires to be saved from punitive justice and eternal punishment must believe, in accordance with the voices of God and the dogmas of the Symbol of the faith, in one God undivided in essence and unconfused in persons, in Father, Son, and Holy Spirit, the consubstantial Trinity, co-eternal, and undivid­ed. This God made in the beginning the heaven and the earth, the visible world and the invisible. Concerning these we now come to speak what ought to be thought and believed.